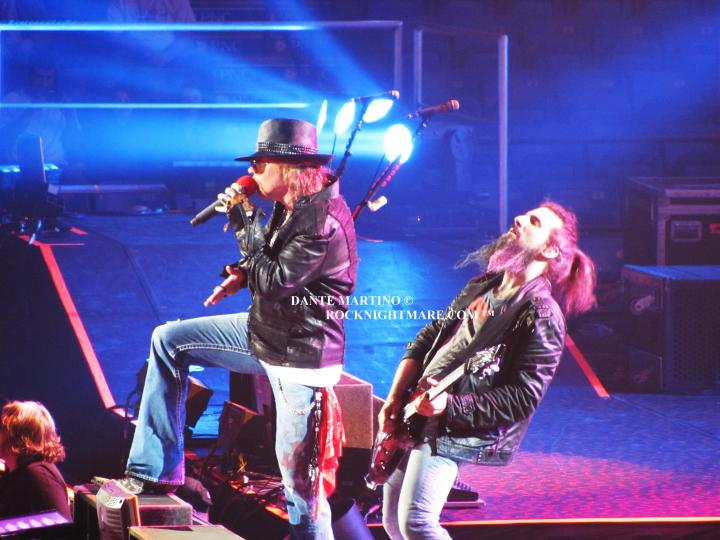 I feel like I’m in a catch 22 here. I feel like I’m expected to write something negative about this show. It’s easy to poke fun at G n R. because that is the norm. Axl this, Axl that, it’s not Guns without Slash. Guess what? Things change, people change and yes bands change line ups as well.

The band took the stage around 11:20 PM. They opened with “Chinese Democracy” followed by “Welcome To The Jungle“, “It’s So Easy” and “Mr. Brownstone“. (I’m not going to bore you with a song by song. There is too many to tell you about. You can read the setlist below.)

There are a few things I must point out. I don’t think any song came off better than any other but I do believe people had their favorites for me it was “It’s So Easy“, “Estranged“, “Rocket Queen“, “You Could Be Mine” and  I think “Chinese Democracy” was a great opening song and I am happy they kept that in the set.

I really enjoyed Dizzy Reed’s Piano Solo as well as Axl’s. I could have done without all the cover songs. GunsN Roses have more than enough songs to fill in those spots.

In my opinion aside from the covers it was a flawless 3 hour non stop rock show. That’s right I said it, FLAWLESS.

CHECK OUT PICTURES OF THE SHOW HERE

Setlist Was As Follows

Welcome To The Jungle

My Generation (The Who cover)(Tommy Stinson on lead vocals, with band introductions)

You Could Be Mine

Instrumental Jam (Another Brick in the Wall Pt. II)

AND REMEMBER “THE ROCKNIGHTMARE RADIO SHOW” EVERY SUNDAY MORNING

10 AM E.S.T. GO TO ROCKADDICTRADIO.COM TO CHECK OUT THE SHOW