On September 28th I had a chance to sit down with Tommy Victor of Prong before they hit the stage at The Trocadero Theatre in Philadelphia PA on tour with Overkill in support of there new album Ruining Lives. The band did a great job and it was very nice to see them kicking ass on this run. Check out the interview below

Dante: Has the fan response been good?

Tommy Victor: Who knows who our fans are? That’s the question? We are always struggling to gain fans. A lot of the old fans are not around anymore or a lot of the old fans don’t like the band anymore. I don’t know if today’s metal audience know who Prong is. So I am kind of disconnected. We have our hard core fans that are very open minded and seem to appreciate most of what Prong delivers. I think those people are satisfied with it and I think if some of them have not heard it yet they will be satisfied when and if they do hear it.

Dante: Let’s talk about the line up. Who is in the band?

Tommy Victor: I have Jason Christopher is on bass. And Art Cruz from Winds Of Plague on Drums. This lineup has been amazing. These guys have been with me for a while now. 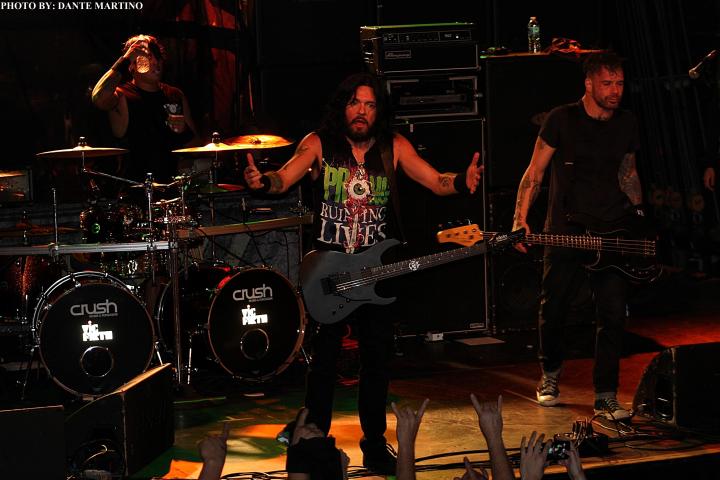 Dante: After this tour what’s next for Prong?

Tommy Victor: After this we do Knotfest, then we do another Overkill tour in Europe for 3 weeks then we do Australia and New Zealand. Then we will start working on a new studio record. But before we get to the new studio record I need to over see the mixing of the covers record we just cut. So first will be the covers record then we will start the demos for the new studio album and we should start a new tour in April of 2015. We may go to South America as well. We have been working of that for a couple of years so we will see how that goes.

Dante: I’m sure you will do some festivals as well next year right?

Tommy Victor: Yeah. We did a bunch of them this year and next year I am sure we will do some. I’m hoping next year we will do a few others that are different. The summer is strong for Prong with the summer festivals.

Dante: Can you say what bands you might be covering on the covers album?

Dante: There is something I have wanted to ask you for a while?

Dante: What is up with the Deth Red Sabaoth album from Danzig?

Tommy Victor: What do you mean?

Tommy Victor: Did you really?

Dante: Yeah I did. I thought it was the best Danzig record since the first 3 or 4 records. But then Deth Red Sabaoth comes out and it seemed to be a very different album. It was almost a let down after Circle Of Snakes.

Tommy Victor: Wow, I’m surprised. It really depends on who you ask and talk to. Some people say they like Circle Of Snakes and others say the like Deth Red Sabaoth. It’s Glenn’s baby as it should be. What I can say is that both albums were done very differently. Circle Of Snakes was done more like a band. We were all in the same room together and working things out. With Deth Red Sabaoth it was more like I would show up, talk to Glenn for a few minutes, he would tell me what he wants done.

Dante: How would you compare your American fans to your European fans?

Tommy Victor: I would like to appeal to American audiences. But it’s hard. I may be wrong but I think it’s a matter of promotion. I think for an older group like Prong it’s a dwindling audience. It’s hard to hit the kids. The kids that are into older bands seem to be interested in Prong. It sounds cliché but over there metal and hard rock is bigger and they have a bigger chunk of the music sales and the charts. There is more focus on it.

Dante: The song, Snap Your Fingers Snap Your Neck was used as the intro song for E.C.W. Pro Wrestling Star Justin Credible. Did you ever get paid for that?

Tommy Victor: I didn’t get any money up front or anything and judging from my bank account and how it’s looked for the past ten years I don’t think I got any ASCAP royalties.I sort of gave up on it. I gave up on keeping a business manager and accountants up on money that is owed to me because they never do anything. So based on what money that is coming in I am sure I have never gotten paid.

Dante: Is there going to be any more videos for this album?

Tommy Victor: I would like to but we are working on some thing that might turn into a movie or documentary. But there may be some live footage from this tour that we may be able to use for another video for the album.

Dante: What is the documentary going to be about? You or Prong?

Tommy Victor: We have not decided yet. The guy doing it is a little mixed up about it. He was showed a demo of it and it was pretty impressive and it was sort of disjointed at the same time. It focused on me and my career and I wanted it to focus more on Prong and then have it look at the other entities and externals that’s are involved. Like Danzig, Ministry, Rob Zombie that kind of thing.

Dante: Yeah a lot of people don’t know you worked with Rob Zombie.

Tommy Victor: Yeah, when he first went solo I worked with him for six months and got shit canned after that. I wrote the song The Great American Nightmare with him too. It was used for the Howard Stern‘s Private Parts. I also preformed that song with them, at the garden. That was the only time I was on stage with them.

Dante: Is there any one piece of work you are proud of the most?

Tommy Victor: I am proud all the Prong albums. I think Beg To Differ is an album I go back to and think “how the hell did I do that“. That record is so weird to me, I just think it’s so good. There are some things that might sound archaic or immature. But I hadn’t been playing guitar that long when that record was made. And Cleansing, who would not be proud of that? To be in a metal band and have a song like Snap Your Fingers Snap Your Neck cross over is amazing and I am grateful for that. There are strippers stripping to it. And it been covered by other bands as well. And the last couple records have been pretty strong.

Brendan Martino: How did Prong start?

Tommy Victor: When I was a kid in high school I was a bass player and Prong sort of happen by accident. A few guys sat down and said “we are going to form a band and Tommy you are playing guitar“. And I thought I better get my shit together so I started to learn songs from Metallica, Celtic Frost, Destruction and Black Flag. I was working at CBGB and going home learning how to play these songs.

Brendan Martino: How did it make you feel having your friends tell you are playing guitar when you were a bass player?

Tommy Victor: I took advantage of it to learn. You take every opportunity you can get and you learn from it. I was not a singer neither. But it worked out. You have to work through your fear somehow. It would get on my head a lot when we first started to play. We would play with bands like the Crumbsuckers. These guys were like virtuosos and there is me. I was a hack. You have to except yourself for who and what you are and that works a lot times. And of course keep working at your craft.

Brendan Martino: Is there any advice you can give to someone that is just learning how to play guitar?

Tommy Victor: You can try everything. Take a few lesions with someone and if you feel your not getting anything out of it don’t continue but if you find someone that you feel you are learning from and are connecting with keep it up. And there is so much stuff online now you can find and do it on your own. Set aside an hour a day and keep at it. Set small goals for your self then after you meet that goal move on to the next one and keep going. It also depends on what you want to do. Playing guitar is an expression of your self so it’s not all just copying other people and learning their songs. Again it depends on what you want to do. Do you want to be in a cover band playing Slayer songs? Well if you do that than you better learn how to play them but if you want to express your self as a song writer than that is a whole other thing.

Tommy Victor: If they are sticking with us I am glad they are. If you look back at the era Prong came out of who is left. How many of them are still around. There is not that many of us left. That is what super charges me to continue. Because I am someone who was there and I hope to carry that on with the older fans. When I play shows I have guys that are in there 60’s come up to me that are really exited that I am still around and I am still doing it. It means a lot to me.

Dante: Tommy thank very much for your time.

Tommy Victor: No problem thank you

FOR MORE INFO CHECK OUT: